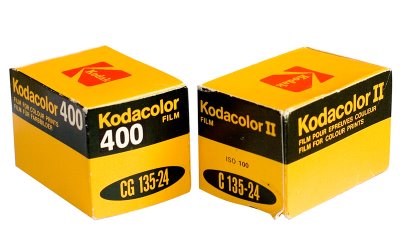 These are two Kodacolor™ films I found in a local camera shop today. they expired in 1983 so I doubt I'll try them.
The reason I'm going to keep them is mainly nostalgic as I started my photographic career when these films were the current emulsion, and C41 was the new process (previously C22)
Inside the box was the original leaflet, please note the exposure info, as mentioned in my previous post 'guessing exposures' 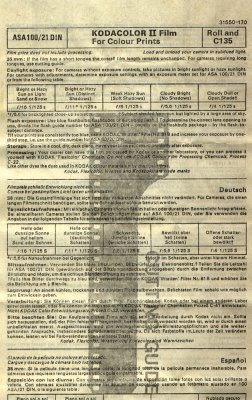 Also of interest is the 'cutting guide' template for Leica thread mount cameras, and this may be useful for some of you LTM users: there is a link to the full size image 'here'
It may be possible for you to save the image (right click Windows just drag to the desktop Mac) then print the template in Photoshop.
Posted by Photo–Smith at 1:07 pm No comments: Links to this post The little collection above is my 1977 Nikon F2 in a Nikon case. The case has room for 3 lenses in a chrome F mount keeper and a flash (where I keep my spotmeter).
The F2 was the sucessor the the F, and is a tough manual camera that needs no battery with the plain DP1 finder but when used with metered finders needs power to operate the meter only.
As you can see the F2 is a rugged workhorse, I'd hate to think how many films have been though it, but I have no doubts about it's reliability.
I have some pretty good lenses with my Nikons, the 28mm F3.5 Nikkor-HC 50mm F2 (superb) 85mm F2 (good and sharp) and the 105mm F2.5 (excellent)
These cameras are available for peanuts now, but at the time I started photography were the de-facto tool for most Pro's. So if you want to try a no batteries manual film camera, an F2 would be a great bargain!
Posted by Photo–Smith at 1:36 pm 5 comments: Links to this post

Most days I carry a camera with me, normally my M4P. Today was no exception, even though the rain was falling out of the sky I decided to put it in my back-pack (I cycle to work).
It rained all day, and for those of you who know the UK it was a grey, dull day; no photographic inspiration.
But on the way home I spotted something I found amusing, someone's jacket had got so wet they'd just put it in the bin.
Not a great picture but worth a go, so out came my spot-meter and camera, took some readings-urgh 60th at F2.8.
Just as I was about to transfer the settings to the camera I felt a tap on my shoulder, and as I turned a guy prodded me in the chest ' have you taken any photos of me', startled I just replied 'no' 'you better not you *unt', he replied.
Not wanting any confrontation I just tuned my back and took 3-4 shots of the bin not wanting to turn round, and hopped on my bike and went on my way.
After I arrived home I spoke to my wife about the incident, she was pretty shocked but suggested I leave my camera at home or only shoot landscapes and the kids.

I'm not going to stop shooting in the towns; but one thing I have noticed, photographing public places is no longer acceptable to the general public. Twenty years ago what was considered to many to be a harmless hobby is now viewed with distrust and disdain, indeed most think you are acting illegally when you shoot a street scene.

It saddens me that i now have to look over my shoulder and it could be that someday someone will take it upon himself to stop my 'anti-social behaviour'.

So I'm a bit down today and there will be no images in this post
Posted by Photo–Smith at 9:25 pm 5 comments: Links to this post