Well I finally did it, I sold the Nikon DSLR and have bought a 4x5 camera. It's really a case of back to the future for me as I've gone back to the camera's I used 20+ years ago, and now all I have is digital wise access to the camera's owned by family members (for this blog)

Film! Are you mad?
Yes, folks to some I am. That sentence was an actual question asked of me whilst in a café with my children. A man about 10 years older than me saw my Rolleiflex sitting on the table-obviously he couldn't understand why in this day and age someone would use a camera from 1961.

I tried to explain why, but got the 'I have a Panansonic and a Macbook' statement as if I should have been even remotely impressed.
So why go film only? Well the easiest answer is that it does all I could possibly want it to do, I don't need instant review as I know pretty well how the image will look; I don't care for speed of operation––the type of photography I do just doesn't need those things.

Film is Expensive
To a degree it is, obviously you need to choose what film to take on a trip and the cost is ongoing which means when I press the shutter it has a pretty obvious cost.
What I can say though is for the type of images I take you don't need to fire off many images, most shoots are planned so a mornings work might involve 4-6 sheets of 4x5 or a couple of rolls of 120 and those outings amount to fewer than one per month so that would be 40-50 sheets per year and 20 rolls of 120 from which in that year I'd expect 15-20 prints. The total cost all in would be about £250 for the film and as I process my work the chemicals probably about £30.
So less than £300 normally without prints obviously.
That sounds pretty expensive, after all with only 20 good finished images that works out to £15 per image!

Why sell my  Digital Nikons?
In all honesty I wasn't using them; the batteries would go flat between times meaning spontaneous shots were sometimes done with cameraphones.
I liked digital but it just doesn't suit my use patterns and when shooting 50 very high quality shots a year doesn't make a £2000 DSLR a good purchase over its lifetime (over ten years of film for existing cameras).
So I managed to sell them while they still had some value.

Moving Forward
At the moment the films I want to use are still available, I don't feel the need to change my shooting style or workflow or adapt them to fit the direction everyone else is heading in. In fact there might even be a perverse pleasure in swimming against the tide of people adopting fast and ever changing technologies.
Just give me a supply of Ilford B&W and Kodak Ektar and I can be happy and creative.

The Eye of the Eagle 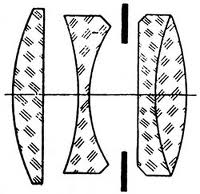 The reason for this post is that I realised how many of my cameras have lenses that are either Tessar or copies of that lens design. The Schneider Xenar, the Ross Xpress on the Ensign 1620 also the Fuji 150W that I use for large format; obviously the lens on the Rollieflex T and the Tessar on the Zeiss Ikon and Rollei 35T.
Back in the distant days where most photographers used glass plates and large wooden cameras the most common lens was of the Cooke triplet type.
Complex lens design was expensive and because designers needed to limit the amount of air-glass surfaces to aid light transmission and keep down flare, correction of aberrations was very difficult to achieve.
So in 1902  when Paul Rudolph's Tessar design was put on the market by Zeiss it quickly established itself as a standard for others to emulate and earned itself the nickname 'Adlerauge' (Eagle eye). The four element design carefully mixed both high and low refractive glass and followed it with a cemented pair which reduced aberrations compared to the triplet designs.
One of the things I like most about the design is the higher contrast due to fewer elements, stopped down a couple of stops and they can compete with later Planar (5 and 6 element) designs even in corner sharpness.
Tessar types remained the standard by which others were judged until the 1950's when lens coatings made multi element lenses practical with their better correction and faster apertures.

Don't underestimate the humble Tessar it is a very capable lens capable of rendering wonderful images.

Over the last hundred years the Tessar has found itself on many iconic camera bodies and has been re computed to allow for both wide and telephoto versions; hopefully it will remain a useful design for many years to come.