I found this old 1930's Zeiss exposure table in my loft recently, it has little value apart from photographic history, having bought an Ikonta of similar vintage recently its nice to have some period documents.

One thing I did note of interest is the DIN, Scheiner and H&D film speed values and their equivalents which may be of use to someone trying to work out speeds of 1930's films. 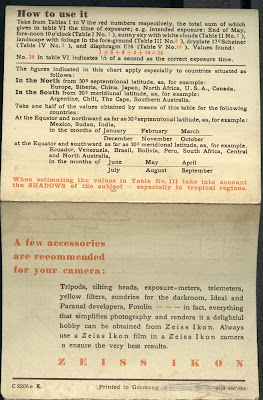 Above is the 'how to use' instructions and a reminder of some accessories available for your Zeiss camera.
If you'd like to see the text more clearly just left click the images to open at 100 per cent view, the text should be easily viewable.
© Photo Utopia 2009
Posted by Photo–Smith at 3:08 pm 1 comment: 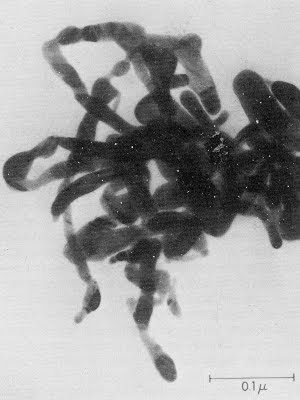 The above is picture of a developed silver crystal that during reduction has transformed into a filamentary mass. This is quite common with most modern developers and film types, and is especially true of fine grain developers of the MQ and PQ type.
What I'm often asked is what causes the filamentary growth? why don't the grains always keep their original post exposure shape?
I'll try to explain.
When a silver halide grain is exposed to light electrons move within the crystal with extreme rapidity. Some of these electrons are 'trapped' in lower energy areas of the crystal such as defects or impurities, the trapped electron makes a still more efficient trap for other electrons and so on.
In this state the silver is said to be a 'latent image' and needs a developer to magnify it.
During development the charge that has been concentrated at the traps is highly negative and especially so at the tips which attract positive ions from the solution.
A needle like protuberance is formed which rapidly turns into a filament, such filaments have a large surface for their volume giving plenty of opportunity for developer ions to be adsorbed along its sides forming a flat ribbon like structure.
This results in a very strong negative charge at the tip of the filament which attracts silver ions, which when they come in contact with the tip are neutralised to give metallic silver and therefore even more rapid filamentary growth.
I hope that this explanation helps those who have asked how these filaments are formed.
© Photo Utopia 2009
Posted by Photo–Smith at 1:47 pm 2 comments: 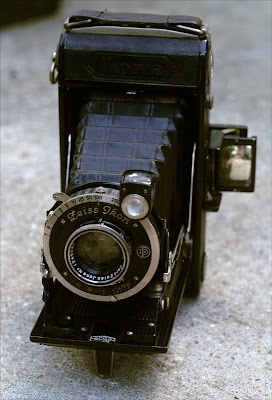 The Zeiss Ikonta was designed by Dr August Nagel shortly after which he left Zeiss to form his own company Nagel Werke who eventually became part of Kodak and made great cameras such as the Retina.
The camera above is a 1932 model with 105 mm F4,5 Tessar lens which because of the age is uncoated, despite this it is a well renowned optic and during the time of manufacture one of the best lenses available. 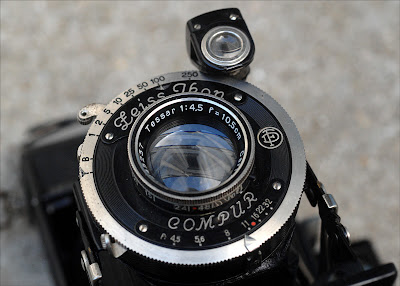 The shutter is a Compur 'leaf shutter' type with speeds 1/250 down to 1 second plus B & T, in which the T setting is used by hitting the release once to open and again to close and is useful in dark conditions when on a tri-pod, probably would make a nice astro photo 'star trails' setting for several hour long exposures.
The apertures run from F4,5 to F32 and are changed using a lever under the lens. 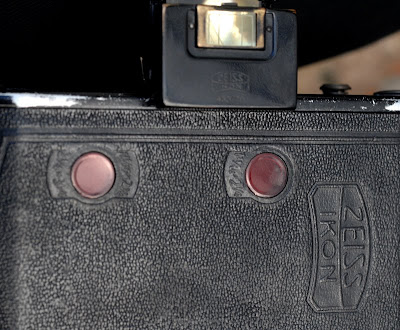 On the back you can see two red windows, the left is for advancing the film 6x9 (8 exposures) the right is used in conjunction with an insert (nearly always lost) to give '645' (16 exposures)
Also in the picture you can see the Albada view finder which is used for framing only, the focus point being guessed- you needed a Super Ikonta model for rangefinder focus. 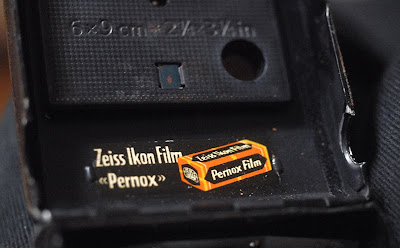 Inside the back is an advert for Zeiss 'Pernox' film
Operation
When you consider how old this camera is (it was produced in the year Hitler came to power) it works very well, all speeds seem to work, the bellows is without holes and the Tessar is free of scratches.
The uncoated Tessar is pretty sharp, probably short of Rolleiflex or Hasselblad Zeiss lenses by a margin but impressive considering the age and very useable in but the most demanding conditions.
The camera is quite a challenge compared to modern SLRs as pretty much everything is guessed, the focus distance, the exposure, the shutter is manually cocked before exposure the wind-on has no lock making double exposure a danger should you forget to advance (also nice for some effects). The alabada finder although yellow with age is reasonably accurate for infinity work closer work is more problematic.
The lens has a minimum focus of 5 feet which makes it none to useful for head and shoulder type portraits full length being the best you can hope for: 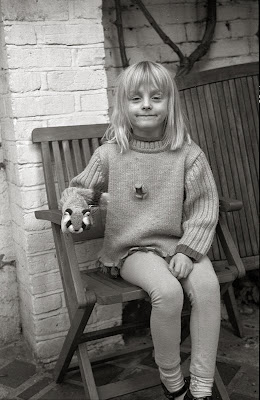 The above is a shot on closest focus at around F8, note the chopped of feet due to parallax error. 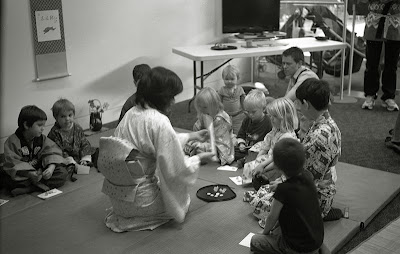 This image was a real test, loaded with ISO 100 film guessed exposure of 1/25 at F4,5 at roughly 25ft distance- actually turned out surprisingly well. 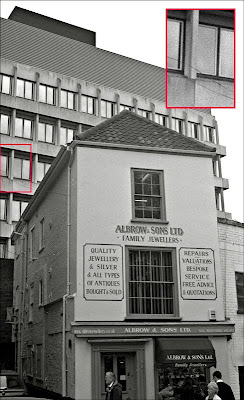 You can clearly see the wires (see enlarged section top right) in this shot of the Jewelers shop proving the old Tessar is quite up to the task for most infinity type work. I'd not be quite so happy to shoot portraits because of the 5ft minimum focus. Finally just a colour shot, Fuji 400H 1/250 at F11 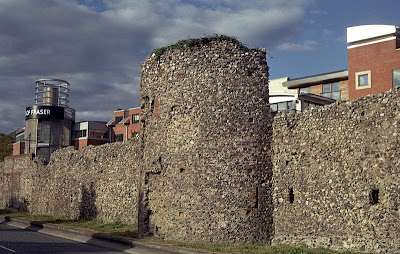 In all I really liked the Ikonta, will probably look for a later Super Ikonta with a coated Tessar ultimately.
I now have quite a collection of folding cameras, and really like the big negative small package they are great cameras available in some cases for very little money (I paid £18 for this one) and despite their very manual operation they can be fun.
© Photo Utopia 2009
Posted by Photo–Smith at 10:43 am 19 comments: