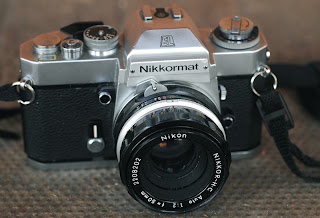 The Nikkormat EL was Nikon's first foray into the world of aperture priority (you set the ƒ number and the camera sets the speed) electronic cameras in 1972.

The model is a much overlooked by modern buyers compared its more glamorous FE/FE2 successors, perhaps people are worried investing in such an old electronic device fearing failure or out of tolerance forty year old electronics.

I decided to take a chance on one I found for less than £50 in a well known UK camera shop, after all the unit came with 6 month warranty–what could I lose?

My fears were totally unfounded, the camera arrived and checked out flawless against a known good meter all shutter speeds and mechanics seemed fine, the only issue I could see was the foam mirror dampener and possibly rear light seals so a kit was ordered from a well known auction site and fitted in less than an hour
at the cost of about £5.

The Nikkormat build quality is from another age, everything from the metal shutter dial to the re-enforced strap lugs are made to last even the shutter speeds are etched into the metal rather than just screen printed — everything feels solid.

Another thing I like compared to the Nikkormat FT is the control placement, which to me is perfect, shutter dial top right (compared to lens mount) ASA dial under the re-wind knob (rather than on the fingernail breaking flange) with nice locks for the film door and ASA setting.
In use the camera feels very positive, the weight is well balanced with most common lenses and wind-on is smooth; the shutter... I just love the soft ssschtick sound just love it!

The batteries are very easy to get hold of type PX28/4SR44 which is a 6V cell. The Cds meter is a little tougher on batteries than later SPD types so you might like to keep a spare handy.

The metering is by match needle on the left of the large relatively bright screen:


I put through a roll of Poundland Agfa Vista C41 and was pleasantly surprised by the results, the meter seemed pretty accurate, especially for one with a simple centre weighted area. 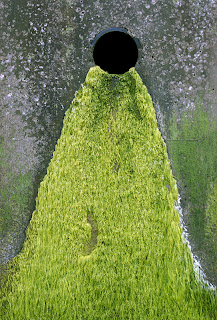 The best way to really give it a test is to put it on auto with a roll of E6; that type of film having less margin for error with exposure.
After all the main reason for buying the camera was to have a 'lazy' camera to take on holidays and trips.
Loaded with Agfa CT Precisa which is a budget slide film (actually made by Fuji) I took the film to the beach for the day:

The automatic meter and Nikons early attempt at making the associated electronics have proven to be a very robust and durable one, my initial fears at buying a forty year old electronic camera were totally unfounded.

So next time you see a Nikkormat EL for half the price of a later Nikon FE don't dismiss it out of hand because of its age, its a well made camera that should last many years of picture taking.
Posted by Photo–Smith at 12:08 pm 3 comments: Links to this post 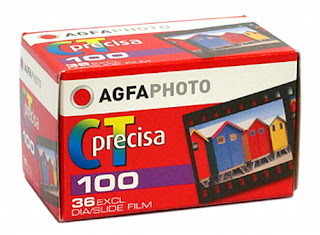 This particular film can be found very cheaply in quite a few outlets, and although 'Agfa' by name is a totally different film from the boxes you may find of CT Precisa with the Agfa rhombus logo from before the bankruptcy most of which will be out dated by now.
This film is in fact made in Japan by Fuji and is actually a pretty good emulsion in its own right, probably very similar to RDP.

One of the things I've always liked about Fuji films is the way they render European skin tones, they accentuate the sun tan and coupled with the nice saturation give nice tones.

The colour saturation and to my eye accurate rendering of tones and colour make this film a little bit of a bargain, well worth getting a roll if you've never used E6.