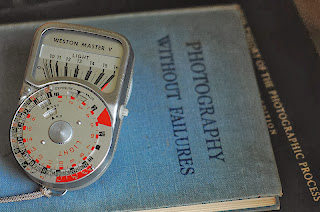 The Weston Company has a very interesting history, the founder was a British born American citizen Edward Weston an engineer with hundreds of patents to his name.

The company made a range of products from the speedometers used on Harley Davidson motorcycles to long life arc lamps.

As well as being a prolific inventor he was also a keen photographer and along with his son (he must have had some spare time) called Edward Faraday Weston they invented the worlds first photographic exposure meter in the early 1930's in fact the early prototypes were used on the film 'Gone with the Wind'.

Weston had two factories, one in New Jersey, America and one in Middlesex in Britain, the British model being slightly different and distributed by the Ilford Photo company.

Practical Use
Here at Photo Utopia we're not afraid to use antiquated photographic equipment; in fact it is one of the reasons for this blog.
The question a lot of you will be asking is why a handheld meter? Further to that why trust a meter that is over half a century old?
Don't they drift and become out of tolerance?
I have three meters currently, a Minolta spot, Sekonic Digilite and this one – a 1960's Weston, and I can honestly say hand on heart that this is one of the most accurate meters I've ever used at any price.

For everyday photography I normally use cameras with built in meters, even then a hand held is a great addition to you photo-bag.
It has a Selenium meter cell thus using no batteries–magic eye!

For accurate metering hand held units with an invercone (the translucent white attachment) can be used to take incident light readings which overall I have found to be more accurate than the reflected type or the ones built in most older film SLR's.

Incident readings are taken with the meter cell (covered with an invercone) pointed at the camera, in other words they measure the light falling on the subject.
The Weston strength is the quality of the invercone which is a concave rather than domed device, and is more accurate because of that clever design.


Even in bright light with transparency film the Weston gives readings that are very accurate, tested against my other 'modern' meters confirms that fact.

Furthermore the dozen or so Westons I've tried or used over the last twenty years seemed similarly accurate, coupled to that I've been told if the needle functions the unit is probably OK

Most people are worried about using selenium meters of a certain age, but I've been quite lucky and have never found one that didn't work–others experiences may differ, but at the price these seem to go for on auction sites (I paid less than £10 for this one)  they make a cost effective choice for those who want to try a hand held meter.