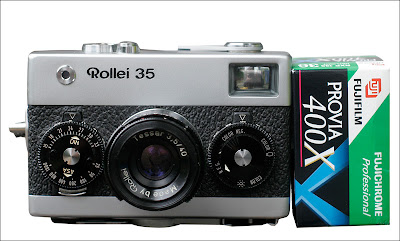 As you can see from the image the camera is about as tall as a 35mm film box and just over twice the width, weighs about 12oz (340g) and is of pretty high build quality certainly up there with most of the 1970's 'semi -pro' cameras like the Nikon FM, Canon A1, Olympus OM1 etc.
When the Rollei 35 was introduced in 1966 it was the smallest full frame 35mm camera in the world. However even though it is only roughly the size of two film boxes the designers still manged to design a camera that gives the user complete manual control.
The small size however leads to some design quirks especially with control placement. The film advance lever is on the left, shutter and aperture dials are on the front and the re-wind lever and flash hot-shoe are on the bottom plate. 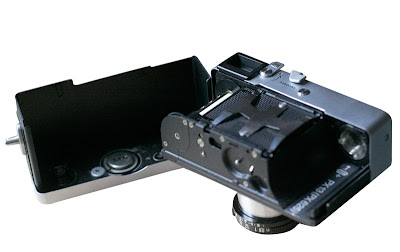 Loading a film is done by sliding off the back and placing the cartridge in the right hand side, threading and advance are similar to other cameras.
Operation is hardly 'point and shoot' firstly the lens needs to be extended from the body and twisted to lock before use, the focus is not by a range-finder but by scale focus "guesstimate" the lightmeter on this model is always on and only turned off by putting the camera back in its case (rectified on later models) Aperture and shutter dials are twisted until the needle is aligned with a red lever.
The shutter is mechanical, and works without batteries 1/2 sec to 1/500 sec + 'B' (only down to 1/30 on Triotar model) and being a 'leaf' type flash sync is available at all speeds.
Despite its 'Quirkiness' the Rollei has a couple of strengths, firstly all manual control, secondly first rate lenses.
Lens Choices
The Rollei came with three different lenses, in order of increasing quality:
Triotar F3,5 (3 element cooke triplet)
Tessar F3,5 (4 element Zeiss classic)
Sonnar F2,8 (The Classic Zeiss design)
Actually for a short time some had a Schneider lens similar to the Tessar.
The following are results from the Tessar 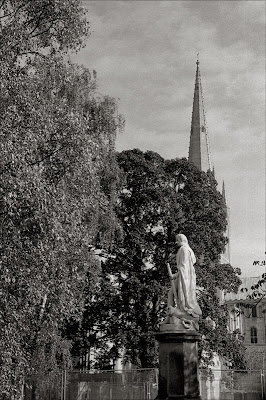 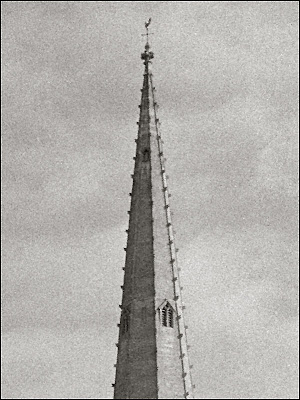 And a 100% crop showing detail 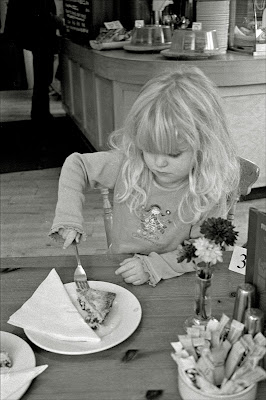 'Yes you can have your cake and eat it Daddy'
The above shot of my daughter was shot at F3,5 and shows the Tessar to be a very good performer, with good contrast and fair sharpness even wide open, they say the Sonnar is better- that must be a very good optic indeed as the results I'm getting from the Tessar are pretty much on par with a SLR lens of the era and certainly better than most compact Point and shoot cameras.
My opinion of this camera after just a week of using is that despite some design quirks it offers a taste of true photography.
That is that it give complete control over settings (and creativity) that P&S cameras rarely give, is a full frame camera in a package that will fit it most peoples pockets, has a build quality that means it will give good service for many years.
All images and Text © Mark Antony Smith
Posted by Photo–Smith at 4:34 pm 7 comments: Links to this post