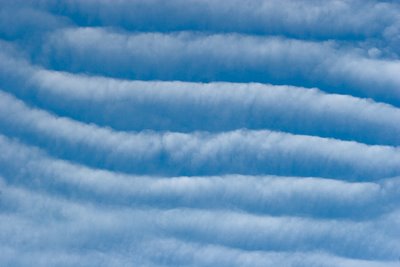 Sometimes it pays to look up! this shot was one of those moments where I saw the sky, got out the camera and took a couple of shots.
Within 5 minutes the light in the early morning sky had changed, also the cloud formation disappeared a minute or two after that. I wonder what sort of air currents cause this ripple effect? Just goes to show that you should always carry your camera with you.

All images and text © Mark Antony Smith 2006
Posted by Photo–Smith at 10:46 am No comments: Links to this post

Sooner or later most film camera users will need to digitise their work. Some (like me) prefer to go from film to digital before the print stage.
There are several options:
Firstly if you shoot negative film you could have it processed at a Minilab and ask for a Photo CD to be made, these will have low and high resolution folders for web display and printing respectively.
Altervatively if you have DSLR you could buy a slide copier attachment and shoot digital copies, this is a fast but not as high quality as a dedicated scanner.
Another option is to scan them yourself with either a flatbed or dedicated film scanner, the latter I have found to be best quality.
Film scanners can be found pretty cheaply on the internet, I found my Minolta DiMage for under £100 delivered to my door.
One of the most annoying things for me about scanning (apart from the time) is the 'false grain' or aliasing, this means that areas like blue sky have more grain on a digital print than they would have printed optically.
In order to overcome this effect with B&W I've seen some suggest that you scan your negs as trans and then reverse them in Photoshop, some more expensive scanners come with grain reducing software like ICE™
One of the first things I did after installing my scanner was to download Ed Hamrick's Vuescan and after evaluation found it to be superior to the Minolta scanner software and well worth it's price.

All images and text © Mark Antony Smith 2006
Posted by Photo–Smith at 1:36 pm No comments: Links to this post