In Praise of Rodinal (Part 1) 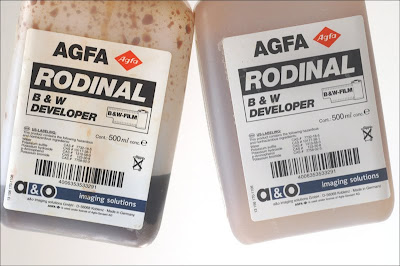 History
Rodinal in one form or another has been available to photographers for over a century. Originally produced by Agfa it can now be found in many different guises Adox/Calbe/Foma RO9 all basically now the same developer.
In fact Rodinal has become a bit of a cult developer, some even make their own using Paracetamol


Rodinal is one of my favourite developers, it is compensating when mixed in larger dilutions like 1:50 or 1:100 this also makes it very economical and to cap that it seems to last forever without going off in its undiluted state.
(although this is only true with undiluted solutions, once diluted I'd personally use the mix within the hour).


While most other developers are useless when they go a dark straw colour, Rodinal remains useable regardless of colour – I have used the stuff when it was black, just take a look at the picture at the top of this article.
I can find no difference in developer activity between new bottles and ones where the solution is the same colour as Cola!

I first used Rodinal in the early 1980's when I worked with a photographer who demonstrated its qualities on a roll of APX developed at 1:50 shot on his 1950's Rolleicord.
At the time I thought he was quite mad as he decanted the tiny amount of black liquid from what looked to be an old brown glass medicine bottle with rubber stopper.
His results were wonderful, with a long range of tones and very sharp, it wasn't long before I had purchased my own bottle (though it came in a plastic bottle)


Rodinal apart from lasting longer than most photographers life spans, also has the advantage of being very economical as it can be used highly diluted 1:50 (1 part concentrate to 50 water) being my favourite; but anywhere between 1:25-1:200 can be used as long as you don't use less than 10ml of concentrate according to Agfa guidelines.
In reality those are pretty conservitive and I use 5ml as my minimum, and this seems to work well as my developer tank needs 500ml for a 120 film so the maths isn't too hard. 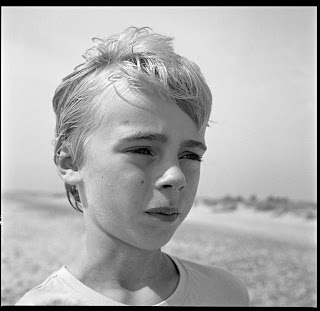 Above is the classic combination of APX developed in Rodinal 1:50

Recently the producers of Rodinal have lost the right to the name as a trademark, I have it on good authority that it is produced in the same factory in Germany but is now known as R09 'one shot' the new label seems to state it quite clearly: 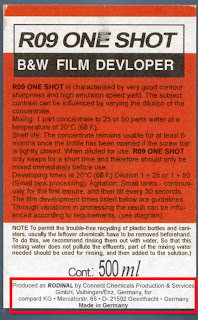 Produced as Rodinal for Connect Chemicals (ringed in red) for any that harbour doubts. In  part 2 I'll give some more examples of Rodinal in practical use as well as possibly showing some tests of how it differs from other developers, results from pushing film, and why I feel it makes a good choice for stand development.