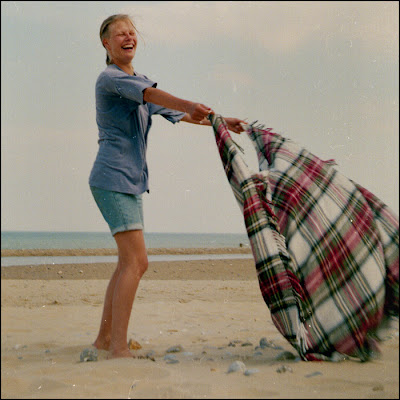 This photo was taken about fifteen years ago, with a Cheap Russian 6x6 camera called a Lubitel 166B.  The Lubitel (Russian for amateur I'm told) has a cheap plastic build and a simple triplet lens that gives a wonderful soft look that is great for portraits.
The idea behind this shot was to give a feel of the 1950's- so film choice was important too, the emulsion used was the now unavailable Agfa Portrait 160. The film was one of my all time favourites with a really nice low contrast natural colour that made it my standard film for weddings and portraits.
Agfa Portrait also had another desirable (for me at least) character, in that if over-exposed by more than 3 stops the film would allow halation to occur softening the highlights and killing contrast (and fine detail).
The picture above was overexposed by guesstimate about 3 stops to give the aforementioned effects and I think it worked pretty well. Today you could use Kodak Portra NC a film that gives a similar natural colour palette.
Cameras like the Lubitel and Holga are considered by some to be toy cameras, but for me they are very important tools that not only are fun to use but can give very satisfying pictures quite unlike anything produced by 'high-tech' cameras.
All images and text © Mark Antony Smith
Posted by Photo–Smith at 9:29 pm 1 comment: Links to this post