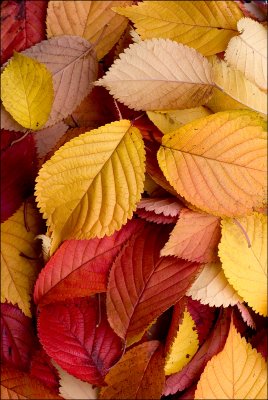 Just last week I was driving down a street in my town and was amazed by the fantastic colours of the trees all the along the avenue. As I was on my way to the train station I had no time to stop and take the picture, but made a mental note to re-visit and take some pictures later.
A couple of days later I returned to the avenue with camera in hand only to be midly dissapointed. Since I'd last been there the wind had removed 75% of the leaves from the trees and the blaze of red, yellow and brown was now on the ground.
Oh well, might as well take a snap of the colourful leaves anyhow. When I viewed the images later I was more than pleased with the results.