This particular film is no longer in production, so you'll have to excuse this post for a certain level of sentimentality as Agfa Portrait was probably my favourite ever film.


I think the film was first introduced in the early 1990's a part of the 'Agfa Triade' which consisted of three emulsions Ultra 50 which was a high contrast & saturation film, Optima 100 which had a normal saturation and Portrait 160 which had a lower contrast and saturation. Later they added an Optima 200 as well and dropped the 'Triade' moniker.
Here is a schematic of the layer structure: 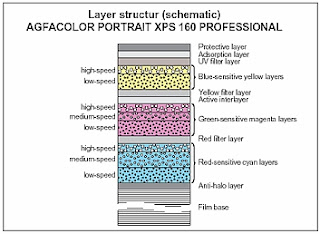 Agfa Portrait had a very natural colour rendition and because of its lower contrast it captured white wedding dress detail even in the brightest of conditions. I also remember it having excellent latitude to over exposure with detail in overexposed areas easily recoverable four stops over, it couldn't be underexposed I'd say half a stop at the most.

I used this film mainly for weddings where the aforementioned detail in the whites coupled with very nice skin tones nearly always gave great results. I think it is one of the most natural colour films I've ever used. 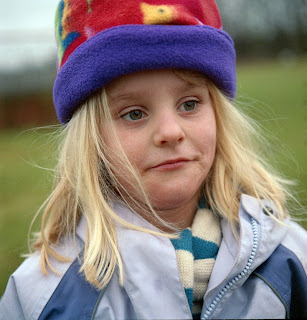 I found a small amount of this film which expired 2007 on a well known auction site and just had to go on a little trip down memory lane and have had fun revisiting an old favourite.

I had forgotten the peppermint flavoured 120 roll seal :)