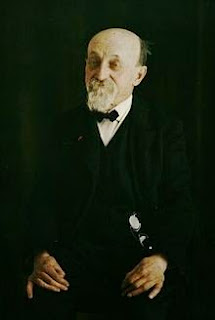 Ask most photographers about early colour photography and they'll probably mention Kodachrome, some might point to the Autochrome process from the early part of the 20th Century but most will be un-aware of the work of one of the colour pioneers Louis Arthur Ducos du Hauron.

Ducos du Hauron worked on the theory of colour photography in the early 1860's writing papers and publishing a book Les couleurs en photographie, solution du problème in 1869.
To start with most of his work was purely theroretical because the photographic emulsions of the time were blue sensitive only and Ducos du Hauron's process required three exposures with different colour filters placed over the camera lens; one green one orange and one violet.
So for the moment the process was purely theory as the materials needed (film sensitive to green and yellow/red) didn't exist.

﻿﻿Then in 1873 a German scientist called Herman Willhelm Vogel made a discovery that would change photography forever. He discovered that the addition of a dye called Corallin when mixed with a standard emulsion extended the sensitivity into the green and yellow regions of the spectrum.

This had a massive impact, for the first time photographers could record clouds and images that differentiated between blue and yellow, this also meant that that now we could record a wide colour spectrum in B&W they could create negatives of differing density with colour filters; the possibility of tripack colour was born.


In it  Ducos du Hauron details exactly how the image above was created.
﻿﻿He found that eosin, a new dye announced in 1876, sensitized to green, orange and blue. A very small amount of the dye was added to collodion and cadmium bromide. This was  then poured over the clean glass plate, which, while still damp, was plunged into a solution of silver nitrate and acidified with a few drops of nitric acid; albumen and glycerine were used as preservatives.

The resulting negatives were exposed with three different filters over the lens giving three B&W negatives representing the scene; each negative then had a colour positive made which was then dyed in the complementary colour of the filter used i.e the orange filtered B&W was dyed blue, the green red and the violet yellow.
The resulting images being sandwiched between glass and viewed with a light behind, rather like slide films of today.

Much of Ducos du Hauron's process is used today although gelatin panchromatic plates are used instead of collodion and  RGB filters are used instead of green orange and violet.
Most modern processes owe a lot to the colour innovation of Louis Arthur Ducos du Hauron a man who shot colour images thirty years before the first colour process became available and over 50 years earlier than Kodachrome.
Posted by Photo Utopia at 11:04 pm No comments: Links to this post