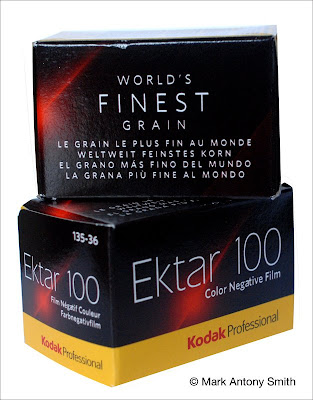 Kodak Ektar 100 according to Kodak: Featuring ISO 100 speed, high saturation and ultra-vivid color, EKTAR 100 offers the finest, smoothest grain of any color negative film available today.
Quite a boast, how does it achieve this speed/finest grain?
The answer is it borrows a technology from Kodaks Vision movie film stock called "2 electron sensitisation" This doesn't mean that it is just a re-packaged movie film far from it. Kodak has been working on the problems associated with the Vision line like poor keeping qualities and more efficient chemical scavengers in order to make the technology suitable for stills use.

What is 2 electron sensitisation?
Here is how the development team explain it:
"Here we describe a new concept for increasing the efficiency of photographic systems, two-electron sensitization, which makes use of the chemical potential stored in the oxidized dyes. In conventional photography, subsequent reactions of the oxidized dyes are not controlled and may in fact include counterproductive return electron transfer reactions (recombination). In the two-electron sensitization scheme, an appropriately designed electron donor molecule, X−Y, that is added to the photographic dispersion transfers an electron to the oxidized dye to give a radical cation, X−Y•+. The X−Y•+ then undergoes a fragmentation reaction to give a radical, X•, and a stable cation, Y+. The radical X• is chosen to be sufficiently reducing so that it can inject an electron into the silver halide conduction band. In this way, the oxidised dye, which is a strong oxidant, is replaced by the radical, X•, which is a strong reductant. The two-electron transfer scheme has the potential of doubling the photographic speed because two electrons are injected per absorbed photon. Photographic data demonstrate that increases in sensitivity by factors approaching 2 can be obtained.".

Phew! so what does that mean for your photography? Simply put the film should have finer grain and slightly higher sensitivity than films without the 2 electron method.

Photographic tests
The following four images were taken mid afternoon, the top chart is in part shadow the bottom is in almost full sun.
Four photographs were taken in quick succession, the meter reading was taken from a grey card placed in the centre and a Minolta spotmeter F was used to find the correct exposure. 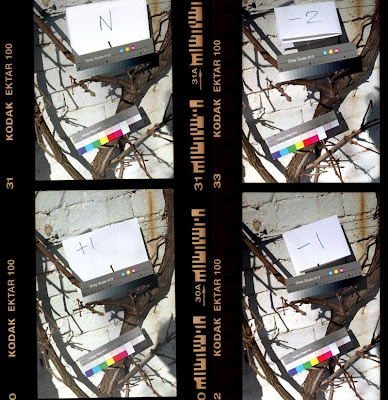 The film was taken to a local chemist and put through their 1 hr Fuji minilab. If you want a larger image just left click the pictures.
As you can see each image has a white paper in it with the respective exposures N (meter setting 100ISO) +1 with the lens opened 1 stop, -1 lens stopped down from normal by 1 stop, and -2 which was stopped down 2 stops from the normal frame.

At first glance an impressive result, the spread between +1/-2 is quite acceptable for normal photography if you have a simple camera without meter or use sunny 16 'guess' exposure method this film should give you enough latitude.
Looking at both the negatives and minilab prints along with the scans it is noticeable that at the -2 setting the shadow detail is beginning to block up, if you look in the shadows of the vine under the top chart texture and detail is not as well defined as in the N frame.
At the other end of the scale the +1 frame looks very good so good that I wish I'd taken a +2 frame as well.
I have read many suggestions that this film should be rated at a lower speed than 100, in my experience that has not proved to be the case. I think it would be best to work at box speed initially and do your own tests with cameras and the conditions you use to find your own personal speed index.

Colours are quite saturated especially in the red and blue parts of the spectrum, but somehow seem to give good skin tones, quite a difficult thing for emulsion engineers to achieve or so I'm told.
The following image was taken on a very dull day in winter. 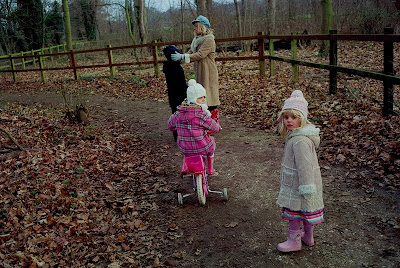 The above scene is the sort of thing Ektar excels at, giving nice 'punchy' colours without overcooking, the magenta bike is pretty accurate as is the shade of pink in the girls boots.

Grain is very fine especially for a colour negative, I have printed a couple of shots to 8x12 inches with no apparent grain, when I get the chance I'll try to print one larger optically to see how far the grain holds up.
The 2 electron sensitisation really gives fine grain, I'll bet we see it introduced into a few more films before too long- Ektar 400 and 1600 would be nice!
Here is a final shot of a garden landscape the colours are pretty accurate as this was taken on a bright cloudless day, the sunlight in the UK can be pretty yellow and the shadows long on sunny winter days. 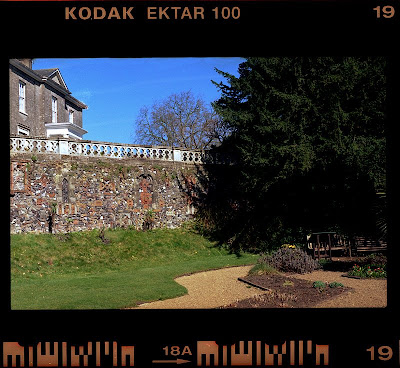 I have now used 5 rolls of Ektar and can say Kodak have a winner on their hands here, since I started to write this they have announced that Ektar 100 will now be available in 120 format which personally I use much more than 35mm.
I think Kodak have shown with this film (and the updated T-Max) that they are committed to providing film users with high quality materials- film is not dead!

© Text and images Mark Antony Smith 2009
Posted by Photo–Smith at 1:28 pm 6 comments: Links to this post