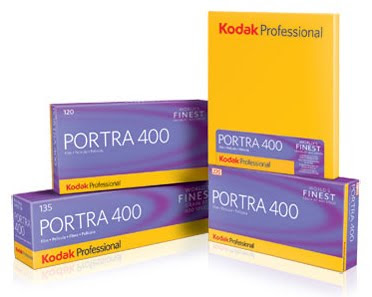 Kodak Have recently introduced a new 400 ISO film to their Portra range here is what their blurb:


The film actually replaces both existing 400 speed films in the Portra range Portra 400NC and 400VC and colour saturation wise falls between those two films, the grain is supposed to be finer than it's predecessors so obviously incorporates the technologies from their Vision movie films.
I think if this film lives up to Kodak's promises it should have a colour saturation similar to Fuji NPH only with slightly finer grain, which will make it a very competitive product.
Like most photographers I see this as a consolidation, the loss of NC and VC will be less of an issue to those who work in a hybrid workflow, and if it helps Kodak to keep turning out better and better products albeit in a smaller range-that's Ok by me.
Portra 400 should be available in November, as soon as I can get my hands on a sample I'll do one of my mini reviews to see if the claims made by Kodak are substantiated.
Here is the Kodak web Page:
Kodak Portra 400
© Mark Antony 2010
Posted by Photo–Smith at 6:40 am No comments: Links to this post