How it works: Kodachrome 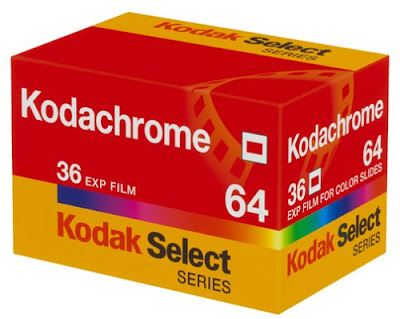 Kodachrome is a non substantive emulsion which basically means it has no built in colour couplers, it at time of exposure is effectively a monochrome film.
The following description is a simplified explanation of the emulsion structure, the actual engineering is slightly more complex.
The film basically consists of four separate coatings which are all monochrome.
The top coating (nearest the lens) is a blue sensitive emulsion, similar in spectral sensitivity to the types made around the turn of the last century in other words it is 'blind' to the green and red parts of the visible spectrum.
Under the blue sensitive coating is a yellow filter, which has a crucial role to play in the function of the emulsion.

The next layer is a blue/green sensitive coating, with a sensitivity rather like an othochromatic mono film, but because of the yellow filter above it in the stack only the green part of the spectrum is recorded.

The last layer is one with an extended red sensitivity, with a trough in the green part of the spectrum rising in the blue wavelength (which is again filtered)

Our Kodachrome film is a complex mix of different spectral sensitive materials and filters, that crucially must have similar photographic speeds or else the resulting images will have colour casts.

When the film is exposed the images are formed in the separate layers (effective RGB) but in order to give a colour positive image these need a special process that has to be both complex and accurate, in fact at time of writing there is only one such laboratory in the world, Dwayne's of Kansas USA and all Kodachrome whever shot in the world goes to this one Lab.

The Kodachrome Process
The following is a simplified version of the process, with some of the washes, intermediate baths and stabilisers omitted.
The first bath is an alkaline wash to convert the 'rem-jet' anti-halation backing into a water soluble form, which is then removed in the pre developer wash.
The first developer is a standard Phenidone hydroquinone B&W developer which gives a monochromatic negative image in each of the layers, after which the film is fogged by red light through the base (bottom of the stack) making the bottom red sensitive coating developable.
Next comes a cyan developer which fully develops the red layer the oxidised colour developer combines with a cyan coupler to form a positive cyan dye image. 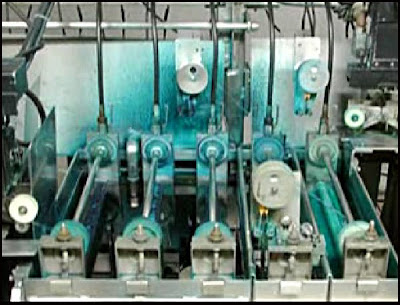 The cyan developer bath of a Kodachrome processor

The film is then exposed to a blue light (through the top of the stack) which because of the yellow filter only fogs the blue sensitive layer, the film now goes through a yellow developer which fully develops that emulsion and the oxidised developer and yellow couplers form a yellow dye image.
All that is left now is the green layer which being sandwiched between the integral yellow filter and the already developed red layer is hard to fog with light, so is chemically fogged in a reversal/magenta colour developer which forms a magenta dye image.
Next the yellow filter is then removed.
After the above has taken place all the silver has been fully developed so can be conventionally conditioned, bleached, fixed washed and dried in the normal manner.