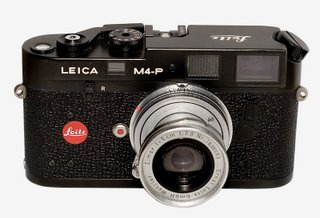 The Leica was the first practical miniature format camera. Invented by Oskar Barnack in order to take pictures while on his mountain walks.
It actually didn't go into production until over ten years after Barnacks 1913 prototype 'UR-Leica'.
But it's diminutive size and high mechanical and optical quality saw it adopted by many photographers for the new ''repotage'' style, to which the camera leant itself to perfectly.
Many other companies have copied the Leica but none have remained as faithful to the original design idea.
In fact Leica announced just yesterday their new digital rangefinder the M8.
Most people would ask what's the fuss? Why would anyone want a manual focus rangefider digi-cam?
Simple, the Leica remains an original; mechanically and optically equalled but never surpassed, something to aspire to, but most of all it is a joy to use and own.
Posted by Photo–Smith at 10:09 pm

I use my 1933 Leica III all the time, I will never part with it, I had it serviced by CRR in Luton last year, I think it should be good for another 70 years no problem.
I love the feel of this little camera its a fantastic piece of engineering, it feels right it looks great, it goes up in value every year and it takes very good pictures. If I had to keep two 35mm cameras it would be my Leica III and my FM3a.

what's the collapsible lens on the leica? I've got a collapsible summar that I picked up for $60 and it does fantastic portraits with nice bokeh. More impressionistic than current tastes but works for me

Hi Richard
Its a screw thread F2,8 Elmar from the late 1950's, very nice lens stopped down, just a tad soft wide open.
That Summar was a bargain, nice lens, fast with a real feel of the 1940's a classic!
I'd like one for the odd retro protrait.
Mark