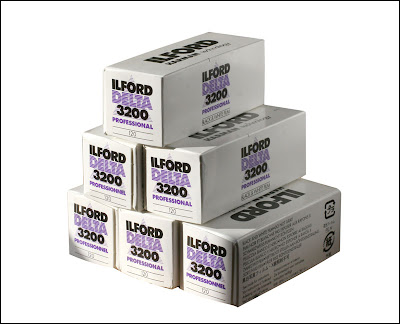 Ilfords Delta 3200 is one of the fastest films available, along with Kodak T-Max 3200 and is a modern tabular (T-grain) emulsion, from Ilfords website:
"Ilford Delta films use a new crystal structure called Core Shell. These new technology crystals capture light more efficiently, offer a smoother tonal range, finer grain and greater sharpness than conventional technology films. The ultra high quality generated by the DELTA PROFESSIONAL films however, requires a bit more care in exposure and processing".
According to Ilford, Delta 3200 has an ISO speed rating of 1000 for daylight exposure when developed in their standard ID 11 developer.
Why call it Delta 3200 if it has an ISO speed of 1000?
Here's a quote from Ilford:

It should be noted that the exposure index (EI)
range recommended for DELTA 3200 Professional
is based on a practical evaluation of film speed
and is not based on foot speed, as is the ISO
standard.
So basically its a 1000ISO film that can be pushed and give good results at EI 3200.

Good image quality can be obtained between EI 400- 6400 and can be pushed to EI 25 000.
One of the huge benefits of Ilfords emulsion over the Kodak T-Max 3200 is that the emulsion is available in 120 size making hand held low light medium format photography a possiblity.
For more info Ilford have a PDF that lists developers and processing times.
So armed with a few rolls I set about taking some low light images at a local night club.
I rated the films at EI3200 which in the conditions I found myself shooting at 1/15- 1/60 at F3,5-4 so it was pretty dark here are some photos. 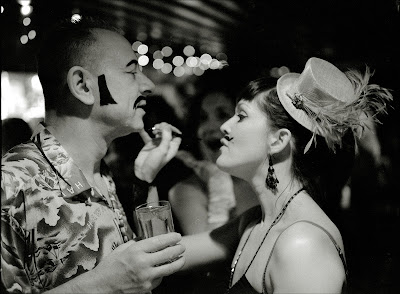 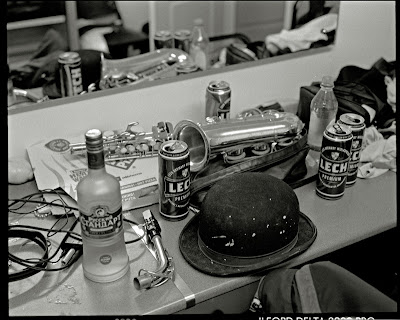 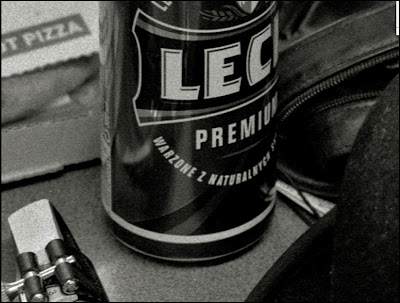 Here is a 100% crop to show grain character.
My first thoughts were Wow look at the tonal range, grain is a little pronounced in the mid tones but pretty good for a film rated at this speed.
Of course these were shot on 120, so tonally they are going to be better than 35mm, ditto grain.
My experiences with the 35mm version are that its is best rated at 800- 1600 EI and developed in Microphen or DD-X where tonally it seems to be ahead of the competition with just slightly more apparent grain, rated at 3200 and processed in Rodinal gives a very gritty look.
I really like this film, especially in 120 where low light hand held portraits are certainly a possibility and as it's the only game in town (please note Kodak and Fuji) at this speed. I can't recommend it more, so if you shoot low light in 120 try this film you won't regret it!
Text and images © Mark Antony Smith
Posted by Photo–Smith at 4:40 pm

I'm a big fan of the Delta 3200 / DD-X combination. Haven't tried it in Rodinal yet. To me, the grain structure seems more smooth than T-Max at the same speed.

I think it depends on developer, I've had some great results with the TMZ in Kodak TMax dev rated at 800-1600.
Yet put that film in Rodinal and grain a go go.
I think its the same with Delta 3200, DDX or Microphen and the grain is controlled, Rodinal gives a George Seurat effect. One thing the Delta has in its favour is tonality.
It is light years ahead of TMZ in that respect and shooting it in 120 just shows what it is capable of.
Mark

smooth fine grain film for night shot. i hope i can find one in indonesia :)

Yes we get all the same beers as you now you have joined the E.U.
I drank a bottle of Tyskie just last night;-)

Thanks for this test! Your results are great. I think mine have been decent, too. In 120, the grain is there, but it's nice, and the tonality is exceptional at this speed (I usually shoot at 3200 and develop in DD-X).
Bartek

Yes the tonality is very good, I sometimes use Microphen (basically powder DDX) when I push it further to EI6400 and beyond.
I'm going to see how far I can go EI wise in a later write-up.
Mark

For normal contrast (and forgetting about granularity) how does the tonality seem best, in Rodinal or DD-X (rated say 1000~1200)?

Tonality is kind of a difficult metric, if you mean mid tones then Rodinal is fine, where it excels (IMHO) is that at lower dilution it"s hard to blow highlights.
DDX/Microphen will give better shadow detail (at recommended dev times) and slightly finer grain, effective speed is certainly higher.
I'm leaning towards Rodinal though because I don't mind grain and you can (or the eye does) accept slight shadow loss with pushing in dark conditions.

At the moment I'm doing some tests with Acros rated at 12,800 is near darkness with Rodinal at 1:100 for in hour, I think that I'm going to have an interesting post in the new year....

Thanks for posting. Wanted to see if how 120 Delta rated at 3200 would look. The grain is modest and very useable.