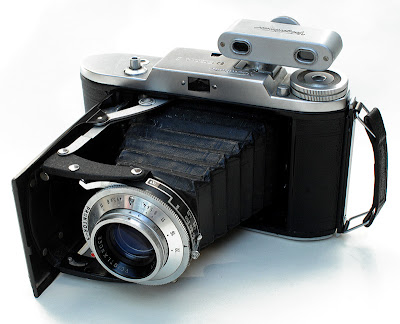 The Bessa I wasn't the first Voigtlander to have that name there was an older pre-war Bessa too which I have an article on here: Link
This particular Bessa was manufactured between the late 1940's up until the late 1950's and is a well made camera that uses 120 film and can give either 6x4.5(with insert) or 6x9 size negatives.
The Model I has a simple finder that lacks a built-in rangefinder, the camera I purchased has a small finder that mounts in the shoe on the top which in practice is pretty easy to use- you just transfer the distance to the lens. 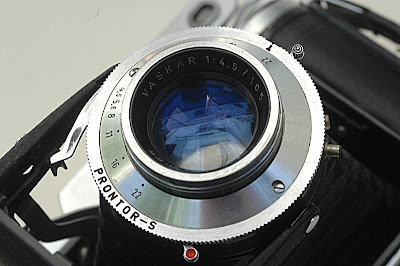 The Lens is a Vaskar F4,5 which is a triplet design, some cameras came with the Skopar F3,5 which is a Tessar type which probably gives better performance optically.
To open the camera just press the button near the wind knob (pictured below) and pull the drawbridge until the mechanism clicks.

Loading the film is pretty easy just place it in the cradle and pull the backing paper to the spool on the left, turn the wind knob and close the back.
The back has two windows, the right hand being the 6x9 and left one for 6x4.5. A centre knurled disc operates a guard which should be closed to stop stray light and has an 'x' to show it is closed it should be kept closed unless you are advancing the film.
The Bessa appears to have a neat anti double exposure device which makes it impossible to fire the shutter without winding. After winding the shutter needs to be manually cocked with a lever before you can take a picture.
So how does the camera fare in a real shooting situation? Although much slower in operation than the Bessa II (coupled RF version) or indeed most SLR cameras it can be used quite quickly set to either the hyperfocal distance or even infinity and stopped down to F11 in practice its just wind and cock shutter then shoot.
The following is a shot just set at infinity 1/250 at F11 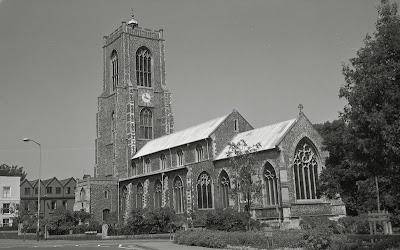 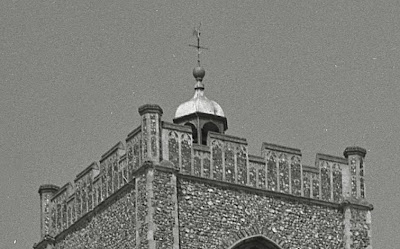 I must say I was surprised by how good the Bessa is, the three element Vaskar is a good picture taker, and although the camera is slow in operation compared to modern cameras once you get a shooting routine things are relatively straight forward.
All of which is nice but why bother using one in this century? After all bellows cameras belong to the same era as Bakelite radios, Flash Gordon and the Great Depression why should a modern photographer bother?
The best answer I can give is the biggest advantage of folding cameras is that when folded they are relatively small for their negative size and can be stored in coat pockets or shoulder bags or placed in a car glove-box for that 'unmissable' travel shot.
Below is an illustration of the size of the camera when folded in my smallish hand. 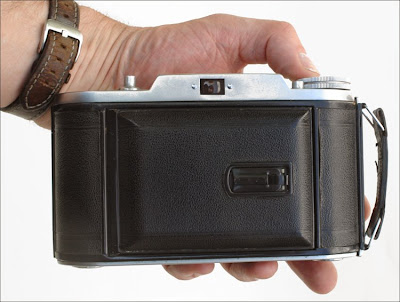 So in all I find the Bessa a far more practical camera than say my Fuji 6x7 RF despite its age and if you can find one with bellows that are in a reasonable condition it should give years of service.
One last shot on Fuji 160: 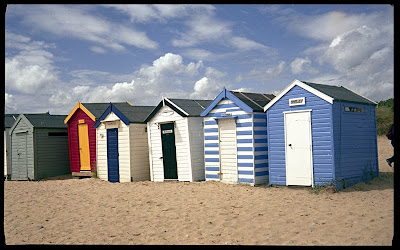 It could be that the folding camera is due for a comeback? In 2008 Voigtländer introduced the Bessa III retro?- you bet, but also a lot more practical that you'd think.
Words and Pictures © Mark Antony Smith
Posted by Photo–Smith at 8:25 pm

I have a Zeiss Nettar (518/16) with a triplet lens. I was surprised how sharp they are past-f/5.6. Wide open they create this cool swirling effect due to chromatic abberation.
Swirling effect
I have a Zeiss Ikoflex with the Zeiss Tessar lens and you can only see some difference below f/5.6.

Hi
I've seen that swirly effect on triplets with large format I think it looks good.
I wanted a Zeiss Ikonta with a Tessar when I bought this Bessa and really only got it because it was cheap. I've only put 2 rolls though it but I can honestly say a triplet with 120 film is 'good enough' for 90% of my photos.
I normally work with 6x6 or 35mm I'm thinking that if the weather is nice I'll put a roll of Velvia in the Bessa this week end.
Thanks for your comment
Mark

In the beginning i would choose a tessar over a triplet. Now that i have both lenses, i cannot justify the price difference based on their performance (of course the Ikoflex is a totaly different camera and much easier to use).

The Ikoflex is an interesting camera pretty much like a Rolleiflex (which I use)
The Tessar is a great lens the Voigtlander equivalent is the Skopar which is quite a bit more than the Vaskar version and for most uses probably not that much difference.
The Besser II comes with a Heliar or Lanthar which are outstanding lenses but they are priced at about the same as a used Hasselblad/Rolleiflex so you pay for the folder form factor rather than ultimate image quality.
The Bessa is 6x9 and small for that neg size though the Vaskar model here can cost £20-30 and at that price is a bargain qualty wise.
Mark

Hi Mark
Another interesting post, I have a Voigtlander Brillant with the Vaskar lens like you have found its performance is most impressive.

That Bessa III looks very nice, shame it doesn't shoot 6x9 like the older models.
Which model of Ikonata were you after I use a 645 format Ikonata with the Tessar lens.
A very compact & light unit for the negative size.

Hi Charlie
Hope you are well.
Yes the Vaskar surprised me, pretty good so far (after 2 rolls) I really like the Bessa its a well made camera.
I had an open mind with the Ikonta I'd have gone for any format, I like the 6x6 when i use my Rollei but 6x9 is impressive.
I can imagine using either a Super Ikonta C with Tessar or even Bessa II with Skopar for landscape work and the Rollei for people shots
My Rollei has a Tessar also what a great lens.
Keep snappin'
regards
Mark
PS I read your blog when you visited Norwich Lord Mayors procession next week-more dragons...

I was impressed by the picture quality of the Zeiss bellows 120 camera I found at a jumble sale about a decade ago, but I gave it away. Yes, they can fold down to a small size, but I still prefer my Rolleicord for the simple reason that I don't have to put it up to my eye to shoot. I fiddle around with it sitting on my [expanding] tummy and nobody seems any the wiser. I continue to get great candid pictures from it that I never got with any of my Zeiss, Voigtlander or Bessa marvels.

Hi Michael
I agree, the Rollei is my first choice 120 camera especially for portraits, I also do a little 35mm work with an F2 and a Leica.
Where I see a use for my folder is landscapes/cityscapes. The 6x9 neg is quite nice for scenery and when folded I can carry the Bessa in my backpack when I cycle to work.
hose simple lenses look very good on 6x9 not sure the edge definition of the 3 element Vaskar is that good so I'll probably look for a Bessa II with Skopar/Heliar or a Zeiss Ikonta C
Mark

I just found your blog and I think it's simply fantastic!

thank you, I try my best, although with my job and 3 kids posting is more sporadic than I'd like.
Happy snapping
Mark

Saw one of these beauties on ebay recently. It was in wonderful shape. Should have gone for it. :(

I bought this one for £20 its in good shape -without the 645 insert, they're about and they made millions-keep looking!
Happy snapping

Hi
You wouldn't know how to recalibrate the finder, mine's out of wack
Imants

No I don't Imants BTW how are you?
the best idea would be to put a 50mm finder from a 35mm RF I don't think mine is accurate it seems to give more along the bottom than I remember.
good question though I'll look into it :-)

Hi di hi
Thanks I'm ok , using a ricoh GR1 of late on snap mode, loaded with Provia 400. Great little camera.... bought it cheap, battered but who cares about cosmetics....... other than that the usual http://www.etrouko.com.au/im/book25.htm

the GR1 is nice, I'm looking for a Super Ikonta at the moment doing more 120 stuff than 35mm
I liked you QT animation, caught a glimpse of your hand in one frame :-)
I have always liked your work, kind of mixed media and a little dark (as in film noir rather than tone)
thanks for your comments,
have fun!
Mark

If I bought a case for the bessa 1 will it fit on my bessa?