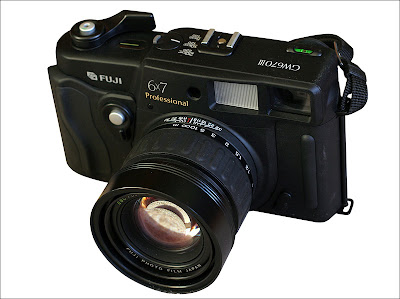 I have wanted one of these Fuji RF cameras for years, if you have been a reader of my blog you'll know that I also use a Pentax 6x7. As much as I like the the Pentax I've always thought it was a little on the heavy side, and in the year or so I've been using it I've rarely found a need to change lenses and found myself using the 90mm for 80% of shots, so its biggest advantage over the Fuji was negated for me. Being a Leica RF user and very much enjoying shooting with RF cameras the Fuji is an obvious upgrade. So when the above camera came into my dealer with only 38 on the roll counter the Pentax was exchanged.

My camera is a MKIII version, and has the ergonomic plastic cover rather than the more substantial looking metal case of earlier Fuji RF cameras. If you squeeze it a slight creaky sound can be heard, I think this is what makes people feel the later cameras aren't as well built. Personally I feel that its just the plastic grip and the overall feel of the camera in your hand makes it worth the creakiness.

The Fuji 6x7 and 6x9 share the same body and lens (90mm F3,5 EBC) the only difference being (apart from negative size) the frame lines and film advance mehanism. The finder has a gold type focus spot and the viewfinder has a slightly blue tinge to contrast with the spot which helps focus. The frame lines move with focus to correct with parallax athough I'm not sure how accurate they are especially when at closest focus (1 metre) One thing I have noticed is that the hood when extended can be seen in the bottom right hand corner of the viewfinder, which is a slight distraction.

Loading the camera is pretty easy, there are two red buttons inside the back that when pressed allow the film to be placed in the camera very quickly. Advance is double stroke, one full and the second stroke is about half (presumably to cock the shutter)

The lens is fixed with a leaf shutter and a 67mm filter thread. The aperture is at the end of the lens under the built in hood (which must be in the out position to change speed/F numbers) I remeber the Olympus OM system had the aperture ring in a similar place. Stranger still is that the shutter is also positioned there, but when you get used to it it's OK and quite fast in operation.

So far I'm finding the camera to be well balanced and a good all round performer, the optics are very good, operation quick, and size and weight manageable for such a large format.

Here are some shots: 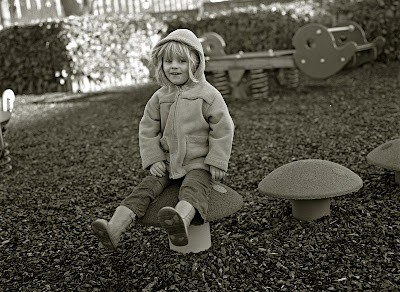 Congratulations to your new camera! I know the feeling; myself, I have a Leica M3 and a Hasselblad 500 C, and would like a medium format rangefinder.

Thanks Gustav
I'm really enjoying the medium format RF, last night I went to an alternative club and shot 5 rolls of Delta 3200 which I developed in Rodinal.
The Fuji has a quiet shutter and is hand hold-able to 1/15 which is something I couldn't say for the Pentax 67
Regards
Mark

I owned this model and I really liked it, but ended up selling it to an MD in Denver about ten years ago when I was strapped for cash. Most people lust for the wider lens models, but I think the 670 is more useful for my style. Have fun with it!

I'm having fun :-)
I initially wanted the 6x9 wide but I think the 90mm 6x7 will be better for portraits and everyday photos.
Who knows possibly I'll buy both.
Mark

I was fortunate enough to come across this camera a few months ago. It makes me.. very happy.

Like you, I'd fancied one of these for years, but ended up with the G645. Sadly I bought it just as I was lapsing into a long period of photographic inactivity, and I never really got used to that camera. I didn't take to the shutter & aperture controls on the lens, and eventually moved it on. I'm not unhappy about its departure, unlike the C330 that I sold when hard up (the Fuji was a replacement for that!).

Now, I have to go and to some stuff, but I'll just have a quick peek at the next post ;-)

Duncan I quite like this camera but isn't without its foibles.
The shutter is the worst sounding shutter on any camera I've used rather like a plastic 'ping' most unlike the 35mm RFs I've owned. I'd hoped for a more 're-assuring' sounding moment of capture like the leaf shutters of the Rolleiflex.
The lens protrudes into the bottom of the frame which I find distracting.
Lenses are good though but I don't use it as much as I'd like if I'm honest.

I was curious. What are your views on HP5 in Rodinal? The last image in this post has really nice tonality.

I really like HP5+ in Rodinal 1:50 it gives nice tonal range especially in MF where grain is not an issue at the sizes I print.
I think I have a post on this blog about Rodinal and a couple of images are made with Rollei/HP5/Rodinal combo.
I have been using Neopan quite a bit as I get it cheap from Fujifilms website.
HP5 is good when you need to keep the highlights its almost impossible to burn out highlights because of the long shoulder.
Mark

Yes, I had noticed this with HP5; it is actually quite similar to Fortepan I think (subjectively).

What sort of EI do you expose HP5 at for normal contrast in Rodinal?

I have a little page on Rodinal here:
http://photo-utopia.blogspot.com/2006/09/rodinal-agfa-rodinal-has-been-in.html