There are many types of density anomalies that can be recorded in the silver photographic image, flare and other optical chain faults, as well as turbidity within the photographic emulsion during exposure. This article concerns itself with a group of anomalies that occur during processing, these are commonly referred to as adjacency effects.

The image above is a small section of a lens test chart, when photographed on B&W film the transition from black to white can be represented by a square wave form thus: 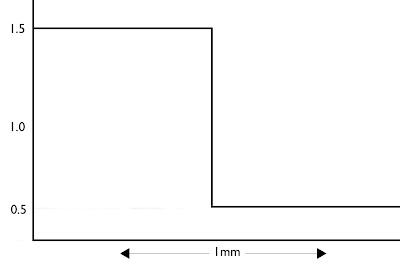 Obviously the representation above is what would be recorded by the film in ideal circumstances, in reality the action of the developer causes a peak (A) and a trough (B) 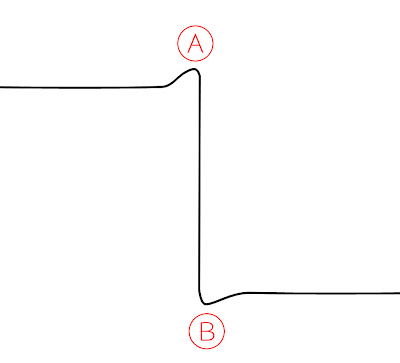 These density anomalies happen during development, at the border of a high/low density areas where the exposed part of the film diffuses bromide (which is a byproduct of development) into the lower density region causing a trough to form (B) as the bromide has a retarding action.
The developer is exhausted in the area of greater exposure causing developer to leech from the lower density area to the higher one, this causes a peak to form (A)
The enhancement of density at the edge of the dense area is known as the border effect the depression at the bottom is called the fringe effect.
Together they form edge effects seen in prints that are known as Mackie lines. 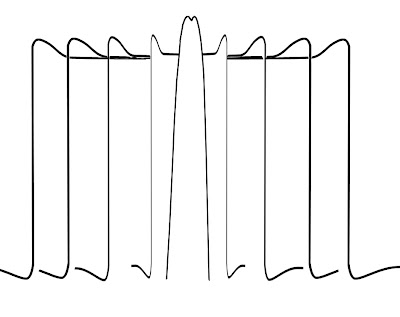 The figure above shows that the increase in density becomes greater as the lines on the chart decrease in size, this is known as the Eberhard effect.
Strangely this effect slows at around 0.1mm and then from that point decreases.
As the lines decrease further the area between them is retarded with respect to the rest of the image and this produces a lower density that is known as the Kostinsky effect.
Studies have concluded that adjacency effects occur with all developer types and that in practice there is little difference between them.
It should be noted that agitation (or rather a lack of or reduced agitation) can make a difference. It has been reported by some users of Rodinal that using the developer at high dilutions combined with minimal agitation can result in increased edge effects.
These are probably produced by macro bromide effects as bromide is the main cause of developer retardation and a byproduct of the development process.
© Photo Utopia 2009
Posted by Photo–Smith at 8:20 pm