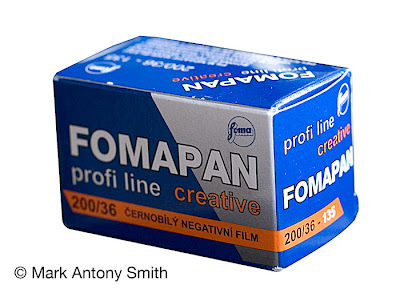 This film, acording to Foma is an advanced negative film using 'T' grain technology similar to that of Kodak T-Max and Ilford Delta emulsions. It is a full stop faster than the 'Classic' Fomapan tested here 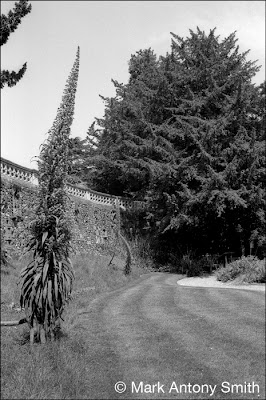 The above image was taken in very bright sunlight at around mid-day metering for the shadow area and closing down 2 stops. The negative shows good shadow detail and highlight separation with fractionally more contrast than the Fomapan 100 Classic when processed at the recomended times. I think this film would be excellent in winter or in dull flat light. I found that Foma 200 was pretty much 'box speed' at the first testing, although recently I have been downrating it to EI 160 which in my seems to give slightly better images. I processed the film in Agfa Rodinal at 1:50 for 8 mins with 2 inversions per min. 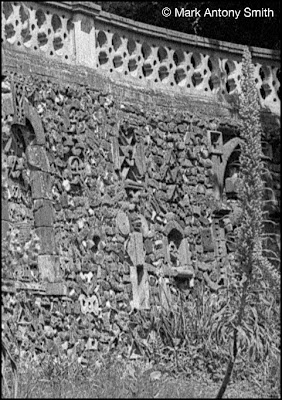 Looking at the crops I would say that the grain of this film is very fine certainly similar to FP4 which is around a stop slower, accutance is also pretty good if this is a T grain type film

The light and shade in the following shot show how well the film handles a scene with wide range, there is detail present in both the shadow and highlight on the print 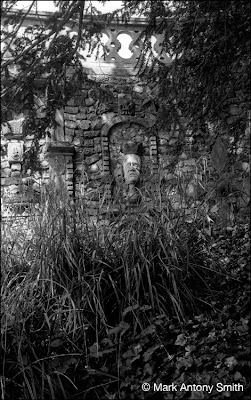 The following shot of a door was taken in shadow, and on my monitor looks to have a lovely rich tone 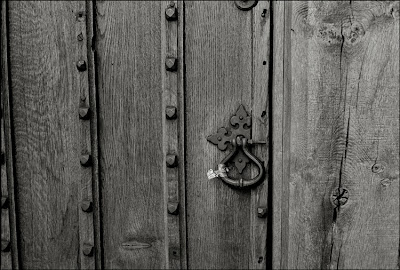 I like the 'Creative 200' its a full stop faster than the Fomapan Classic and is a higher contrast emulsion with similar grain, possibly slightly more compressed tonanally than the Classic.
One thing I'd like to add, I'm not sure about the manufacterers claims that this is a T grain film, it behaves more like conventional emulsions (which is good) but doesn't quite have the smooth fine grain structure of say T-Max 100.
Makes me wonder is this film a T emulsion mixed with cubic grains? or is the grain less tabular than the Kodak?
Edit 2012:
Foma had problems with this emulsion with some users experiencing pin hole emulsion defects. Their response was to stop production and my sources tell me the emulsion and the machinery has been changed in an effort to cure the problem.

Recently the film was re-introduced, and seems to be on a different base, and the actual sensitivity seems slightly lower. The film was out of production for several years, any film in stock currently will certainly be from the new improved emulsion.
On a separate note the make up of the film is certainly a combination of traditional cubic grains (slow record layer) with an over layer of tabular type grains (faster record) which seem to be similar to the Ilford and Fuji Epitaxial type.

intersting film.. i knew that they have papers but not femiliar with foma stuff.
found their web-site.. looks very intrrsting.

Yes I think that Foma have tightened up Quality control.
I've used the 400, 200T and 100.
I'd like to try their Reversal B&W not that Agfa are Kaput.
Mark

Well the acutance of Rodinal (or Fomadon R09, both para-amino phenol) on Fomapan T200 is high especially visible on 35mm format but the grain is clearly visible then even more accentuate when using a yellow filter with this film which is a mixture of classical cube crystals and a type of hexagonal "Tgrain" silver halogenide material. (Picture 1. and picture 2.)
Combined with a modern type phenidone/hydroquinon developer it is missing this high acutance but still very sharp with less grain.
(RHS/AM74 for example).
However with Xtol you will also loose the acutance and some more sharpness, the combination with Xtol is very good, also reported from more customers. An advantage of Xtol is indeed you can almost shoot on box speed but with this film that means (like Microphen) E.I. 160-200.
That the effective iso rate of this film is much lower than you would expect according the Creative 200 indication you can see on the data sheet of this film:
http://www.flickr.com/photos/joachimsen/1001533716/

Charlie
here is the URL